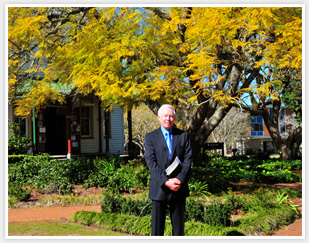 John Carter standing outside the old Chapel at Avondale College in New South Wales, Australia, where he studied to become a Preacher.

John and Beverley Carter have been in ministry for almost fifty years.  John  graduated from Avondale  College in 1961, and has been preaching and teaching the one true Gospel of Christ ever since.  Australia, their homeland, is not a religious country, and the secular culture of the land Down Under has influenced the focus of their ministry.

When the Carter Report TV ads about the wonders of ancient Egypt and the Bible were aired in the city of Melbourne, (the second largest city in Australia) the impact was almost overwhelming.  So many people flooded the telephone center with insistent calls for reservations for the Carter Report program, that the huge phone company was overwhelmed and temporarily knocked out of action.

Two years after the successful Melbourne campaign, the Sydney Opera House witnessed 20,000 people flooding through the doors in multiple sessions.  This was a record attendance. 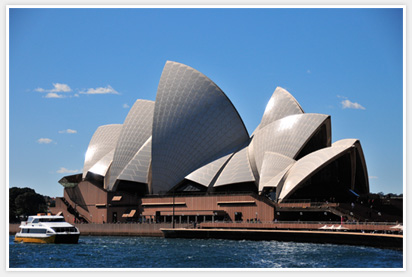 In 1982, The Carter Report attracted an audience of 20,000 people, the largest attendance ever seen inside the prestigious Sydney Opera House. This highly successful program ran for nine months much to the amazement of the ‘critics’!

It is reported that more “secular” people have attended Carter Report programs than have attended religious programs elsewhere, anywhere!  The evidence witnessed by multitudes on four continents backs up this claim.  After Sydney, John and Beverley moved to the USA, and in spite of vocal opposition from clergy and laity, conducted meetings at the famous Shrine auditorium downtown Los Angeles.  A record breaking 24,000 souls, most of them unbelievers, thronged the doors of that huge theater made famous as the venue for the Academy Awards. 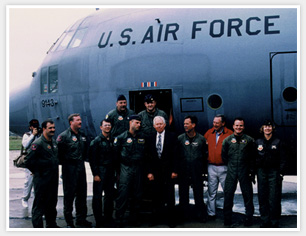 “To Kiev with Love”. The United States Air Force lends the Carter Report a hand by delivering 11 tonnes (25,000 pounds) of medical equipment and medicines to the hospitals and orphanages who look after the victims of Chernobyl.

After the miracle at the Shrine, doors opened for the Carter Report in the Soviet Union.>

Vast crowds attended their meetings, and Russian television for the first time in history carried the distinctive advertising that invited the masses to the programs.  The 30-second ads had been shot and produced on location by  the Carter Report team in the Middle East.

On Russia and Ukraine television these simple, direct messages presented by the evangelist at remote exotic locations had a powerful impact.

In Kiev, capital of Ukraine, more then 100,000 people were turned away from the opening meeting.  At the end of those power packed programs more than 3,500 souls (formerly Communists and atheists) were baptized into Christ in the famous Dneiper River.  Glory be to God!

A Baptism in Kiev, capital of Ukraine, where more than 3,500 are baptised into Jesus Christ. This is the largest baptism of Ukrainian people by any denomination in the 1,000 years since Christianity gained its first foothold there.

The Carter Report team goes wherever God opens the doors.  Cities that have rejected traditional religious approaches have responded with passion to this “thinking outside the box” approach.   Huge crowds have attended the meetings in Russia, Ukraine, Africa, India and other lands. 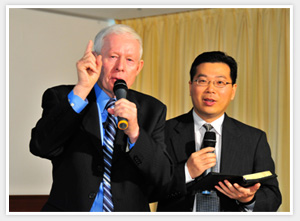 Preaching and Teaching in Hong Kong to Ministers from Mainland China.

Moscow, St Petersburg, Kiev, Nizhny Novgorod, Irkutz, Dnipropetrovsk, Kharkov,Odesa, Volgograd and Kazan are names that represent, to most of us, a strange and alien culture.  These centers of influence, once bastions of Communism, now have tens of thousands of Christian believers because the Carter Report answered the call, and went supported by the prayers and gifts of “partners” in the Homeland.

John Carter does not have a lot of confidence in most church committees that just sit around, deliberate, pontificate, and end up doing nothing.   He likes to remind people that on his visits around the world he has not seen a single monument to a committee.

As he warms to his topic, he will tell you that most church committees he has had anything to do with were more successful in stopping things than doing things.  He will tell you, “Jesus told us to reach lost men and women with the one true Gospel of Christ, and we don’t need a committee to tell us what to do.  What we need are willing hearts, good attitudes, and the power of God’s Holy Spirit to get the task done.”  He will add, with a smile, “and the gifts of God’s people!”